Half of American workers don’t save for retirement in a meaningful way. It’s not because they don’t want to save; many just don’t have access to a quality retirement plan through their employer. Only 14% of small businesses offer a savings plan, and many existing plans charge high fees that can cut into workers’ savings over time.

That’s beginning to change under new state legislation aimed at the private sector. Many of these laws take effect in 2017, and your company may be impacted through a requirement to offer coverage.

But before you start worrying about mandated coverage or new costs that cut into your bottom line, there’s good news: better technology has made it easier and much less expensive to offer retirement benefits to your employees.

Legislators in a number of states have been quietly passing laws since 2012 to help small business employees gain access to long-term retirement accounts, mostly in the form of individual retirement accounts or IRAs. The new laws are designed to broaden employee access to retirement plans and to simplify administration for employers through features like automatic payroll deduction.

The big idea is that this can help shore up a massive lack of retirement savings in the American workforce — 29% of Americans 55 and older don’t have any retirement funds at all.

Going into 2017 all eyes are on California, the largest of the seven states that are rolling out mandatory employer-sponsored retirement programs. Under its Secure Choice legislation, small businesses with five or more employees will be required to offer a retirement plan or provide access to a Secure Choice IRA through a state-run fund. This new law could enroll as many as 7.5 million people in new retirement plans. 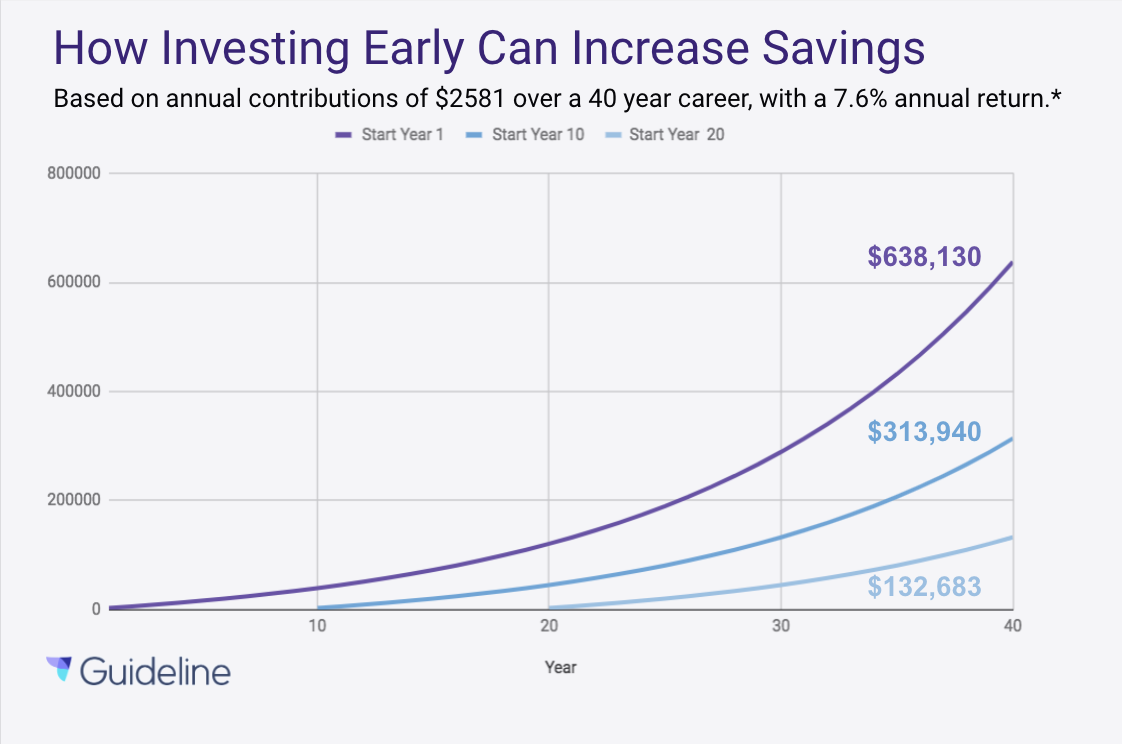 The graph above is hypothetical and does not represent actual performance results of Guideline’s portfolios. It is provided for illustrative purposes only and is not intended to constitute investment advice nor an assurance or guarantee of future performance. Investing involves risk of substantial loss as investments may lose value.
The returns presented in the graph above are based on the historical performance of the S&P 500 index, and represent returns for time periods that preceded Guideline’s existence. As such, they may not reflect the impact that material economic and market factors might have had on Guideline’s decision-making if Guideline was managing portfolios during such time periods.

* $2581 represents the average annual contributions made to defined benefit plans by US employees in 2016, based on deferral data from 2017 T. Rowe Price “Reference Point” benchmarks and median income data from the US Census Bureau. 7.6% annual returns are based on the historical performance of the S&P 500 and its predecessor indices from December 31, 1928 to December 29, 2017. 0.06% represents the the blended AUM fees for index funds in Guideline’s managed portfolios.

For employees, growing a retirement nest egg through a 401(k) or IRA gives access to the incredibly powerful financial force of compound interest. And younger, millennial workers have the most to gain from California’s legislation, given their longer investment horizons.

Seven other states have passed similar legislation in recent years — some of which take effect in 2017. Many more states also have legislation in the pipeline that could roll out over the next decade.

Each state does things its own way. Some rely on state-run plans with default payroll contributions, while others are looking to purely opt-in plans available through marketplaces.

Here’s what to expect in the states with new rules on the way:

Connecticut: Connecticut passed legislation in early 2016 for a program to begin July 1, 2017. Under the new law, individuals working for employers with five or more employees (with no other retirement plan in place) are required to be auto-enrolled in an IRA-like plan, with deductions starting in January 2018. The law will provide access to a retirement plan for an estimated 600,000 people who are not already covered by a private employer’s plan.

Illinois: In Illinois’ Secure Choice program, which is expected to launch a pilot program in 2018, employees will be automatically enrolled in an IRA with deductions from payroll. The law will affect companies with 25 or more employees that have no other retirement option in place and is expected to provide coverage for 1.2 million workers. The default contribution will be 3% of each paycheck, but workers would be able to opt out or change that contribution.

Massachusetts: A 2012 law in Massachusetts helps workers at small non-profit employers gain access to 401(k) plans. Newer 2015 proposals‚ which are still under consideration, would expand the state’s retirement plan access with a plan much like Illinois’ Secure Choice savings program.

Maryland: A law passed in 2016 is expected to provide retirement plan access to as many as 1 million workers who do not currently have such access with their company. The law, expected to be implemented in 2018, would give employers a choice between offering an IRA-like plan provided by a private financial services company or use a state-run plan, according to The Baltimore Sun.

Washington: The state passed a law in 2015 to create the Small Business Retirement Marketplace, which would help workers at small businesses match with affordable retirement plans offered by private financial services. The marketplace will launch in January 2017. There is no mandated participation, but it’s estimated the marketplace will help workers at the state’s 90,000 small businesses shop around and compare retirement plans.

New Jersey: The Garden State passed a law in 2016 that will create a Retirement Marketplace for small businesses to compare retirement plans similar to one Washington state will launch. The portal will be available to companies with up to 100 employees and it’s voluntary for both employers and employees. This marketplace could be available to nearly half of all workers in New Jersey.

Oregon: The state’s law, passed in 2015, is expected to phase in starting in July 2017 and provide as many as 1 million Oregon workers with access to an IRA-like retirement plan. The law provides employees with automatic enrollment in a state-sponsored retirement savings plan, that includes a default payroll deduction of 5% with an automatic annual contribution escalation, all on a flexible, opt-out basis.

How small businesses can prepare for these changes

As 2017 opens, companies in states with new rules will want to keep tabs on relevant changes. Some states have a mandate that affects companies with as few as five employees, while others will only affect companies with 25 or more employees. We should also note that it’s a great idea to offer a retirement plan, even if you’re not forced to; it’s one of the top three benefits employees want.

So make a plan to:

Traditional small business 401(k) programs have annual record-keeping expenses that range from 0.25% to 1% of the value of assets employees invest in the plan. With additional fees and investment management costs, the total fee stack can reach up to 2% annually. New programs (like the one we offer) can reduce your fees and administrative hassles considerably, so it’s worth a little effort to make sure you’re getting yourself and your employees the best plan — whether you’re required to or not.

These laws are changing fast, so we also recommend that you consult your legal and financial advisors before making any decisions regarding the retirement plans you offer.

This article was originally published on Gusto Framework. Special thanks to Catherine New for her help.