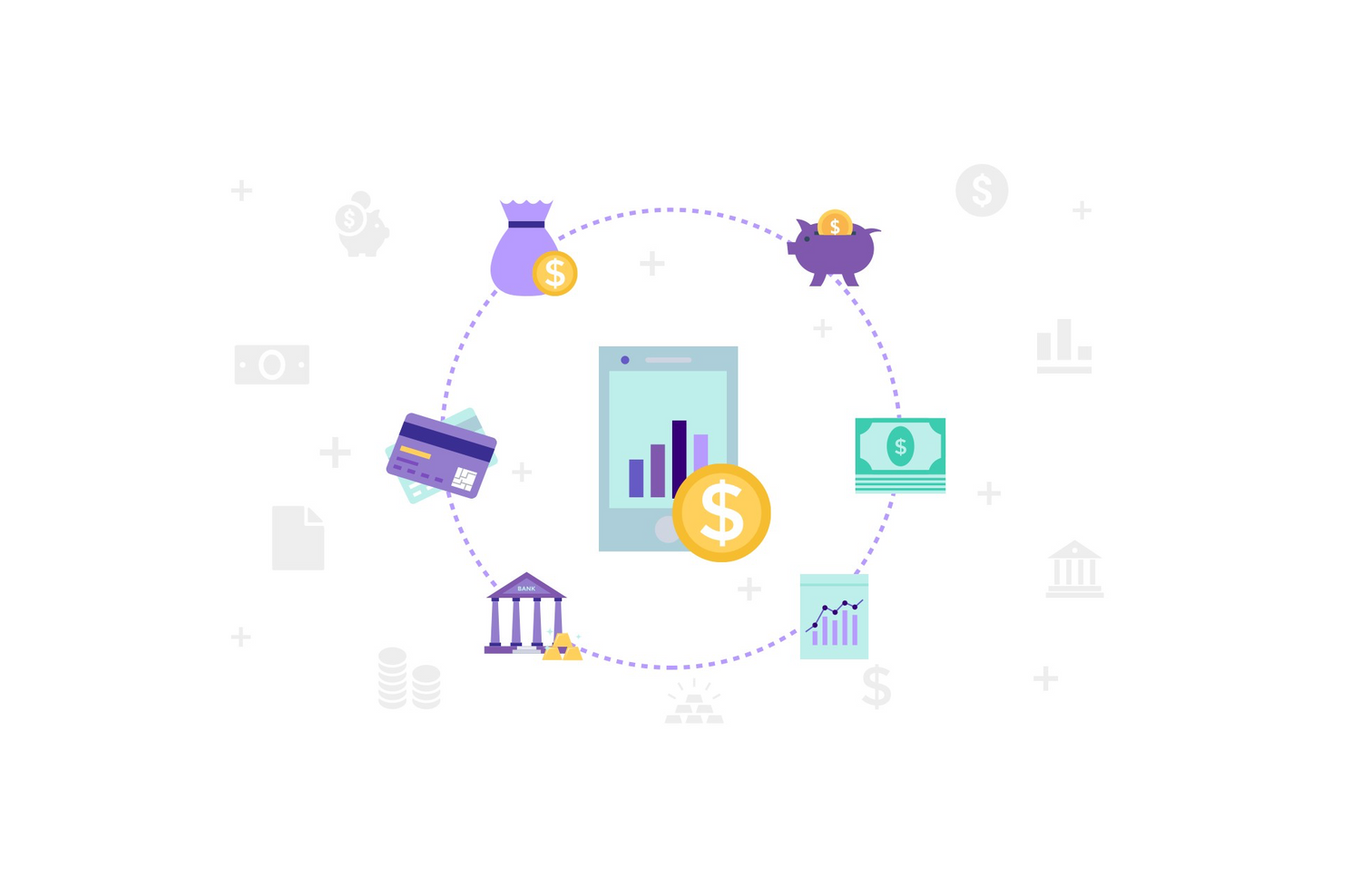 Too few Americans save for retirement for two reasons: Many companies still don’t offer retirement plans, and the majority of employees aren’t taking advantage of their employers’ retirement benefits. As a result, Americans approaching retirement have an average balance that’s too low to support their needs. The good news is that participation rates have been gradually increasing over the last decade, as more companies offer 401(k)s with automatic enrollment, making it easier for people to save.

“The ability of employees to contribute directly from their paychecks and the use of features such as automatic enrollment make the workplace an effective place to encourage saving.” — John Scott, Director of the Retirement Savings Project at the Pew Charitable Trusts 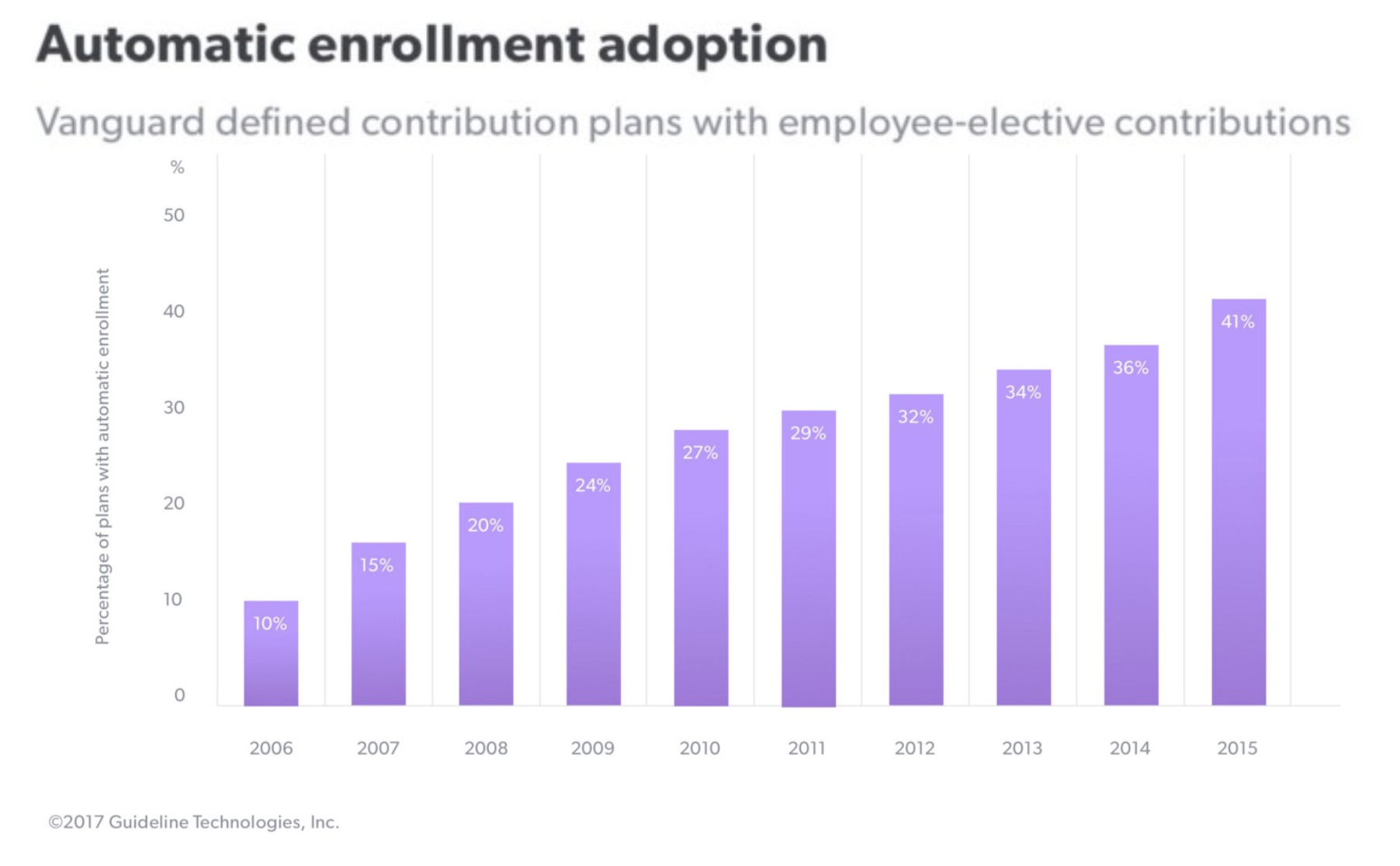 Automatic enrollment to the rescue

Saving as a habit is challenging because of our innate bias toward the present. It’s hard for people to overcome the tendency to spend today, rather than save for tomorrow. People put off saving, don’t enroll in their 401(k), and time marches on.

In the 2016 report, “[How America Saves](https://institutional.vanguard.com/how-america-saves/overview.html,” Vanguard notes that companies “have increasingly turned to plan design to influence employee retirement savings behavior.” Employers who sponsor a 401(k) are beginning to recognize that employees have a hard time following through on their good intentions to save for retirement — a concept known as employee inertia.

Automatic enrollment uses this inherent employee inertia to an advantage. In a 2001 paper published in the Quarterly Journal of Economics, “The Power of Suggestion: Inertia in 401(k) Participation and Savings Behavior,” economists Brigitte C. Madrian and Dennis F. Shea concluded that 401(k) participation is significantly higher under automatic enrollment.

By offering a 401(k) that includes automatic enrollment, companies leverage employee inertia to improve retirement outcomes. Employees can always change their contribution rate, select different investments, or opt out at any time.

There is one potential downside to automatic enrollment — companies might set their default deferral rates lower than employees would be inclined to contribute. In “How America Saves,” Vanguard deduced that while automatic enrollment increases participation rates, it also leads to lower contribution rates when the default deferral rate is set to 3% or lower.

The Plan Sponsor Council of America found in its 59th annual survey that the average salary deferral (pre- and after-tax) for all participating employees was 6.8%. Even though deferral rates can be adjusted at any time, the aforementioned inertia can result in employees saving less than they should because there is the false sense of security that they’re saving enough, when they’re not.

Additionally, a too-low default deferral rate may lead to employees missing out on free money. A 2015 Financial Engines report, “Missing Out: How Much Employer 401(k) Contributions Do Employees Leave on the Table?” revealed that over 1 million employees left $1.4 billion in employer matching contributions unclaimed and estimated that across the United States, employees were losing out on $24 billion by not contributing enough to receive their full employer 401(k) match.

Vanguard’s 2015 white paper, “Automatic Enrollment: The Power of the Default,” states that “the default decisions made by plan sponsors under automatic enrollment have a powerful influence on participant saving and investment behavior” and “can use the inertia inherent in participant retirement savings decisions to improve retirement outcomes.”

All Guideline 401(k) plans include automatic enrollment without exception. We suggest that companies set a default deferral rate of at least 4%, or one that maximizes its match — whichever is greater. We’re also event driven, nudging participating employees to consider increasing their contribution rates at opportune times.

We built Guideline deliberately. Our 401(k) platform is based on research that indicates automatic enrollment is an effective way to get more employees saving for retirement. We believe the trend of companies incorporating this feature into their retirement offerings will continue to increase.

Special thanks to John Scott at the Pew Charitable Trusts and Olivia S. Mitchell at Wharton for their thoughtful feedback.