When you set up an employer-sponsored 401(k) plan for your team, you to need figure out who is going to handle the fiduciary duties, and you're probably going to come across the term ERISA.

A fiduciary duty is the legal obligation to protect the plan’s assets for the sole benefit of plan participants and their beneficiaries. The big question you have to answer is whether this duty is something you — the plan sponsor — should take on, or if you should outsource it to a third-party provider.

To give you an idea of what’s involved, here’s a look at what a fiduciary has to do, what they’re responsible for, and how you can go about making the best choice for your employees.

What is a fiduciary?

Generally speaking, fiduciary duties come into existence when a person or entity is entrusted with property or power on someone else’s behalf. When you decide to offer a 401(k) plan, you’re offering a great benefit but you’re also taking control of some of your employees’ investments. That’s why a duty arises to make sure your company’s plan ultimately ends up benefiting those employees.

Not all decisions about a 401(k) plan are fiduciary decisions, though. There are also business decisions, such as whether to set up a 401(k) in the first place and whether you want to add features like profit sharing or safe harbor provisions. If you’re making decisions on behalf of the business, you aren’t acting as a fiduciary. Keep these two different roles in mind as you read on.

It all starts with ERISA

Because a 401(k) should exist solely for the benefits of employees, Congress imposed strict standards of conduct, responsibility, and obligations for fiduciaries under the Employee Retirement Income Security Act of 1974 (ERISA).

According to ERISA, basic fiduciary duties include:

This set of duties is often broken down along these lines: 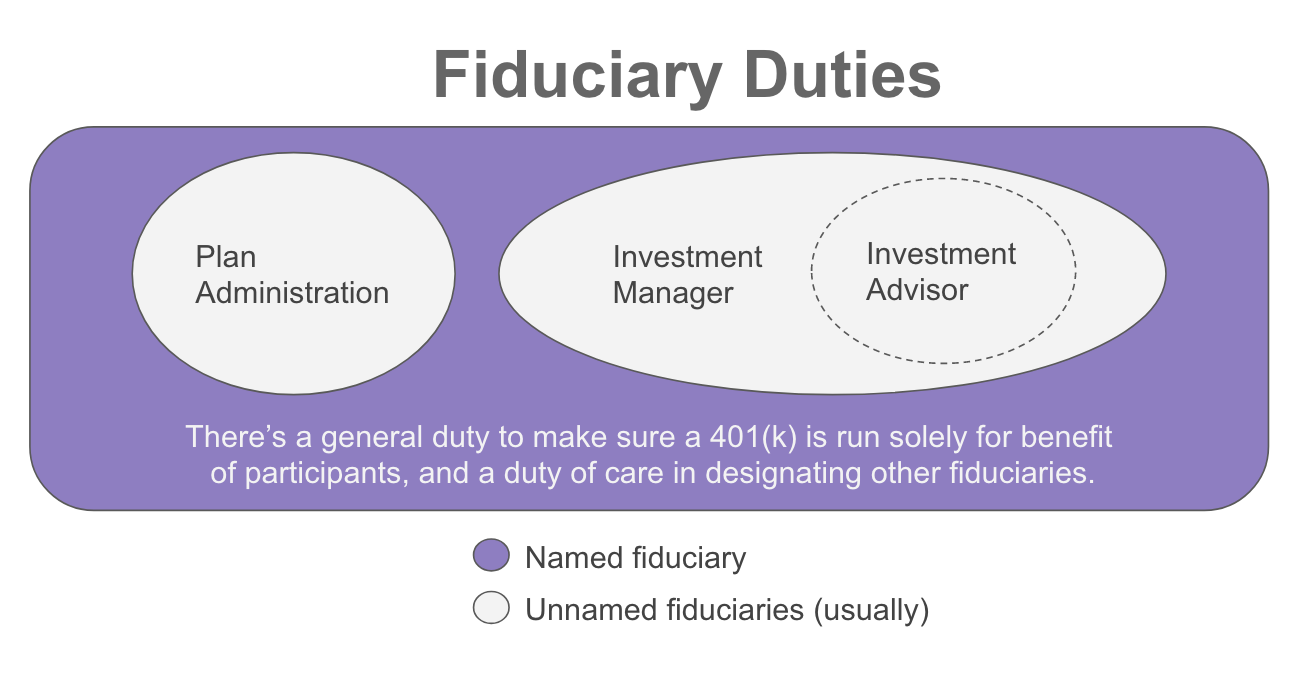 ERISA also specifies that fiduciaries need to avoid engaging in any prohibited transactions. This includes the transfer, use, or borrowing of plan assets by any “disqualified person” — a broad term that includes fiduciaries themselves, non-fiduciary service providers, company owners, directors or officers, family members, or employees of the company (unless they’re entitled to receive benefits from the plan). Prohibited transactions can also refer to conflicts of interest or taking advantage of the plan for the fiduciary’s own benefit.

Under ERISA, a named fiduciary may designate other fiduciaries to oversee various plan functions and take on potential liability for acts or omissions in the maintenance of the plan. The three different types of fiduciaries are established by ERISA Sections 3(16), 3(21), and 3(38):

To be clear, 3(21) and 3(38) fiduciaries serve similar functions, but the difference is that a 3(21) investment advisor only plays an an advisory role in helping choose investments for the plan. A 3(38) investment manager actually chooses investments:

Should you use a third-party provider as a fiduciary?

In other words, a sponsor can never totally abdicate their role as a fiduciary. The ultimate responsibility for the plan lies with the plan sponsor, regardless of whether another fiduciary is appointed. So choose who you work with carefully.

Managing a 401(k) is a significant responsibility — it’s about the future security and comfort of your loyal employees, after all. But just because it’s a big responsibility doesn’t mean it has to be a big burden. Check out our checklist for 401(k) providers to see what third party providers can do for you — and how to pick one that makes sense for your business (and your employees).