Last month I watched John Oliver berate the 401(k) industry. It was so good! If you haven’t seen it, you should. He spent the majority of the segment exposing the ridiculous structure of a legacy 401(k) plan. I’ve spent the last few years building the solution. Let me explain…

When my wife and I relocated TaskRabbit to the Bay Area from Boston in 2010, TaskRabbit was a super young, scrappy startup in the midst of building the first on-demand marketplace in the world. We were hiring fast, and benefits vendor selection was the last thing on my mind. However, a few years later, when we started building a more senior team and were deciding what types of benefits would help us attract top talent, we revisited some of our early decisions.

In 2011, we added a 401(k) plan, and we went down the path of least resistance. We chose ADP, our payroll provider at the time. Our “goal” was to offer a 401(k) plan and check that box, because our employees had been asking for it. Looking back at that decision, I realize now that it was a mistake. I should have looked for a vendor that provided the clearest path towards a successful retirement for our employees. Those two things — providing a 401(k) plan and providing employees the opportunity for successful retirement — are actually not the same.

A couple of years later, feeling ambivalent about our decision to use ADP for our 401(k) plan and wanting more information about exactly how high-quality a plan it was, I became obsessed with researching our plan and the alternatives. I started finding little bits of information here and there — fees that seemed a little out of place and inappropriate; for example, plan asset-based fees and menu fund fees. When you dig into the details and the relationships that outside vendors have with legacy 401(k) providers, it’s clear that the industry has lost focus on the goal, which is to give employees the opportunity to save as much as possible for retirement. You start to notice all of the hands in the cookie jar: TPAs, fiduciaries, recordkeepers, fund managers, broker/dealers, sponsors, custodians, RIAs, and on and on. It’s incredibly confusing, which I imagine is the intention. 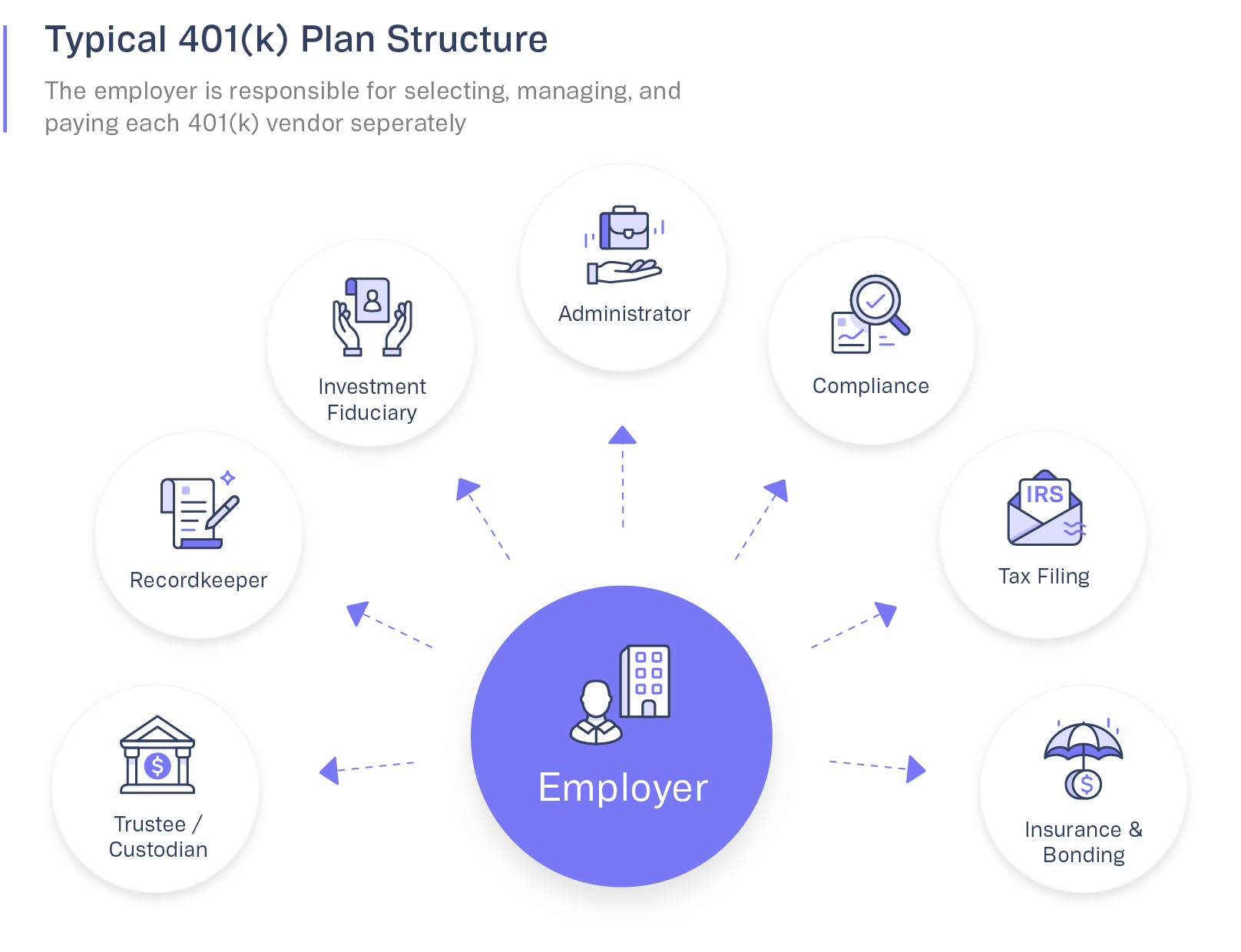 In fact, Laurie Rowley, the president of the nonprofit National Association of Retirement Plan Participants, told NPR, "Sixty percent of people don’t know they’re paying any fees at all in their 401(k) plan." I followed the money. Each of those “services” — TPAs, recordkeeping, custodial services, fiduciary services — needs to be compensated, and I wanted to figure out how 401(k) plan providers made their money. Each service can be, and likely is being, compensated via “wrapping fees.” Note: If you see the words “wrapped fees” in a retirement plan, that’s another hand in the cookie jar.

Here’s an example: If you’ve ever looked at a fund expense ratio on Morningstar, Yahoo Finance, etc., you’ve probably noticed a particular number — let’s say 25 basis points. 25 basis points equate to 0.25%. If you bought that same fund in your 401(k) plan, you could easily end up paying an additional 0.75% on top of the fund expense, and your final costs would be 1.0% of your assets in that particular fund. Those are wrapped fees. The national all-in expense ratio for 401(k) plans with less than $1 million in plan assets ranged between 0.68% and 2.66%, paid for by the very people trying to save for retirement, your employees. It may seem insignificant, but it has a detrimental impact on the final balance. 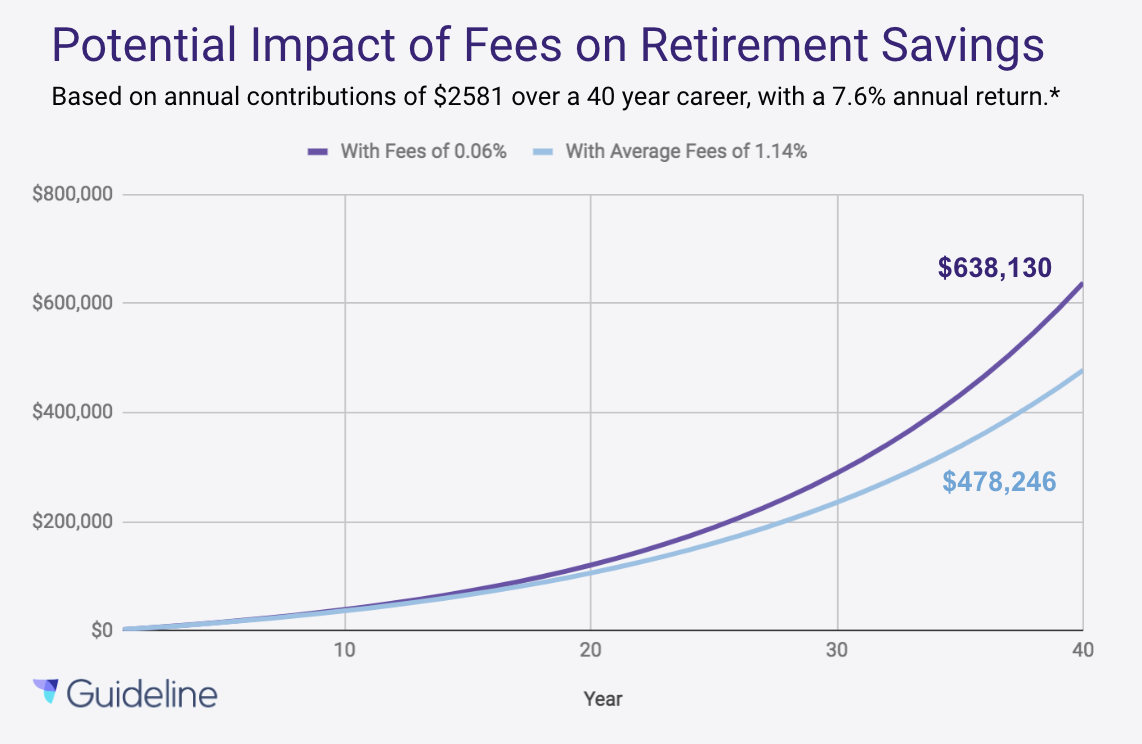 The graph above is hypothetical and does not represent actual performance results of Guideline’s portfolios. It is provided for illustrative purposes only and is not intended to constitute investment advice nor an assurance or guarantee of future performance. Investing involves risk of substantial loss as investments may lose value.
The returns presented in the graph above are based on the historical performance of the S&P 500 index, and represent returns for time periods that preceded Guideline’s existence. As such, they may not reflect the impact that material economic and market factors might have had on Guideline’s decision-making if Guideline was managing portfolios during such time periods. The returns presented represent the hypothetical returns achieved by two funds achieving the same underlying performance, net of management fees of 1.14% and 0.06%.
* $2581 represents the average annual contributions made to defined contribution plans by US employees in 2016, based on deferral data from 2017 T. Rowe Price “Reference Point” benchmarks and median income data from the US Census Bureau. 40 years represents the length of a career that begins after college and ends with social security eligibility. 7.6% annual returns are based on the historical performance of the S&P 500 and its predecessor indices from December 31, 1928 to December 29, 2017. 1.14% represents the average assets under management (AUM) fees of 401(k) providers with $1 million to $10 million in AUM based on a 2018 Brightscope/ICI study of 401(k) plans. 0.06% fees represents the the blended AUM fees for index funds in Guideline’s managed portfolios.

When I was thinking about my goal, providing a successful retirement for my employees, I simply could not justify that fee situation when trying to account for value in each of those services in a retirement account. There’s no magic to retirement investing: You should keep your fees as low as possible, diversify your investments, and keep your asset allocations appropriate for your age and risk tolerance. Re-balance, and think long-term. The rest are services that are justified only in terms of meeting the requirements imposed by government agencies (IRS, DOL) and regulations such as ERISA. Those requirements are put in place to help protect the plan participant and are necessary. In no way am I discounting their necessity. The fees charged by third parties for those services, however, are completely misaligned with maximizing an employees’ retirement potential. And therein lies our major opportunity.

I realized that the best way for me to ensure the successful retirement of my employees is to reduce expenses and allow their hard earned money to grow, fee-free! This realization led me to found Guideline in 2015. I raised a $2 million seed round, based on an idea and some early product that exposed the cumbersome solutions and inequalities in the retirement industry. My co-founders and I started at the bottom and worked our way up the stack, replacing every hand in the cookie jar with code. We focused on a clean and transparent design in product and as a company (we are a team of engineers and designers). We pride ourselves on being crystal clear in regards to how we are compensated.

We started with recordkeeping — years of work and a ridiculously difficult problem to solve, but easily worth 0.25% in that final expense ratio. We don’t “manage” recordkeeping, we ARE the recordkeeper. Plan Administration and compliance — another 0.25%. We hired a Chief Compliance Officer. Yes, my very first hire was a lawyer. Imagine the look on my potential investors’ faces when I told them that was my plan. TPAs gone, not needed, knocked off another ~ 0.25% from that expense ratio. We hired CFP® practitioners and experienced financial advisors and formed an investment committee in charge of portfolio design. We based our investment philosophy on modern portfolio theory. I’ll get into target date funds in a future post (we don’t use them)… On and on, we brought every aspect of offering 401(k) plans in-house. We are full-stack. We optimized our stack, continued to add efficiencies, and reduced costs. We rebuilt 401(k)s from the ground up. This is not about providing a barebones UI and streamlining document signing for us. That doesn’t change the game; it just makes it look prettier.

We officially (beta) launched on November 23, 2015, with a final average expense ratio of 0.13%, the lowest in the industry, and this ratio INCLUDES the mutual fund expense! Since then, we’ve been able to decrease the fees paid by managed portfolio participants to just 0.06% annually. We are a full-featured, custom 401(k) plan, not a Multiple Employer Plan. Guideline aims to fill the role of the Chief Retirement Officer, taking the responsibility for managing retirement plans off the CEO’s hands, so the CEO can focus on growing the company in the most cost-effective and efficient ways possible.

Guideline’s growth has accelerated rapidly: We have thousands of customers and manage millions of dollars in the markets. We are well-positioned and aligned with our customers’ ultimate goal: to maximize successful retirement potential for their employees.

I never found my ideal 401(k) provider, one that would offer my employees a transparent, straightforward path to a successful retirement, and that’s why we built Guideline. I’m beyond grateful to my wife Leah, my co-founders Mike and Cabs, and our earliest investors, specifically Dayna Grayson. You all believed in my idea and our ability to re-build 401(k). You gave me a shot at fixing retirement in the U.S., and we are well on our way to doing exactly that. 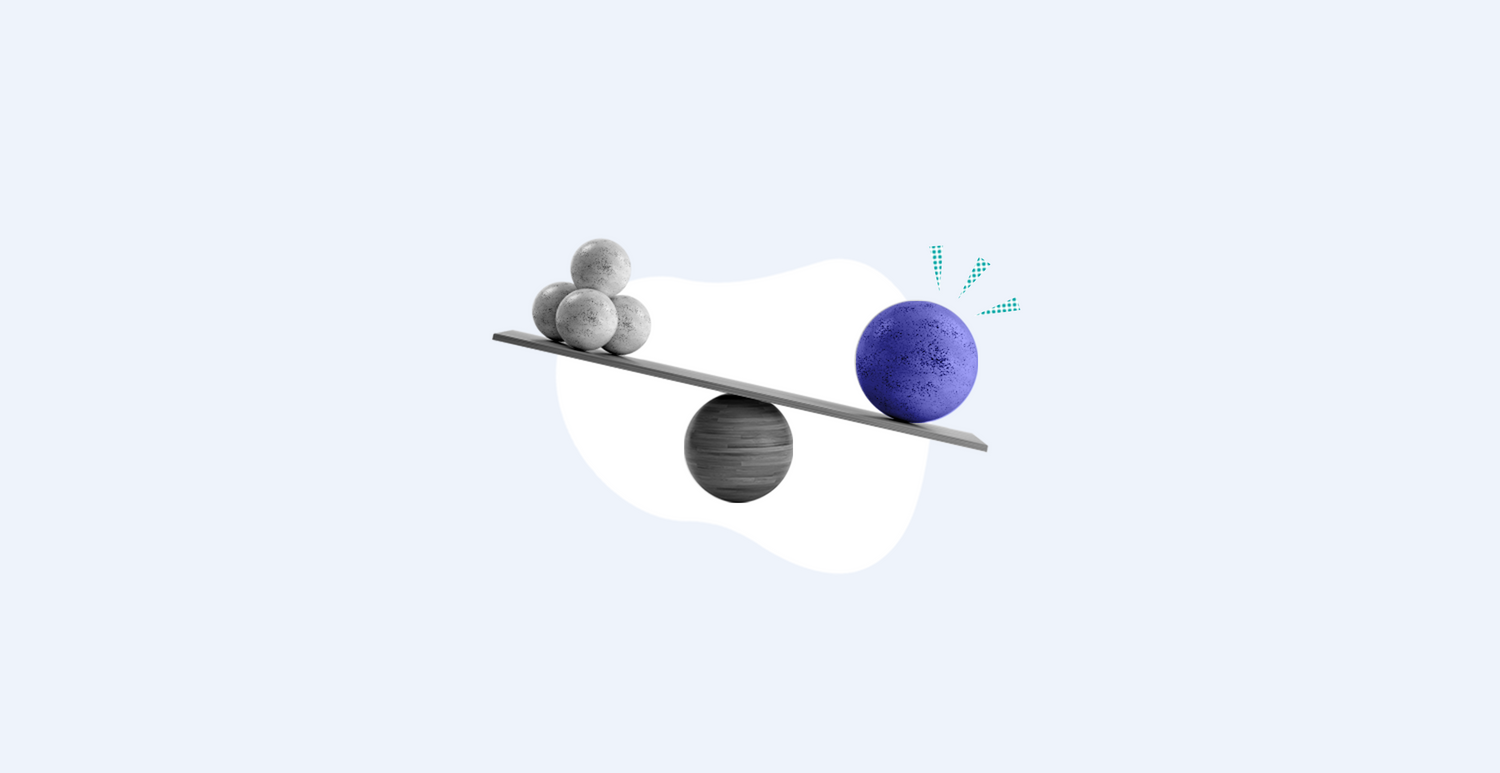 With Retirement Investing, Less is More 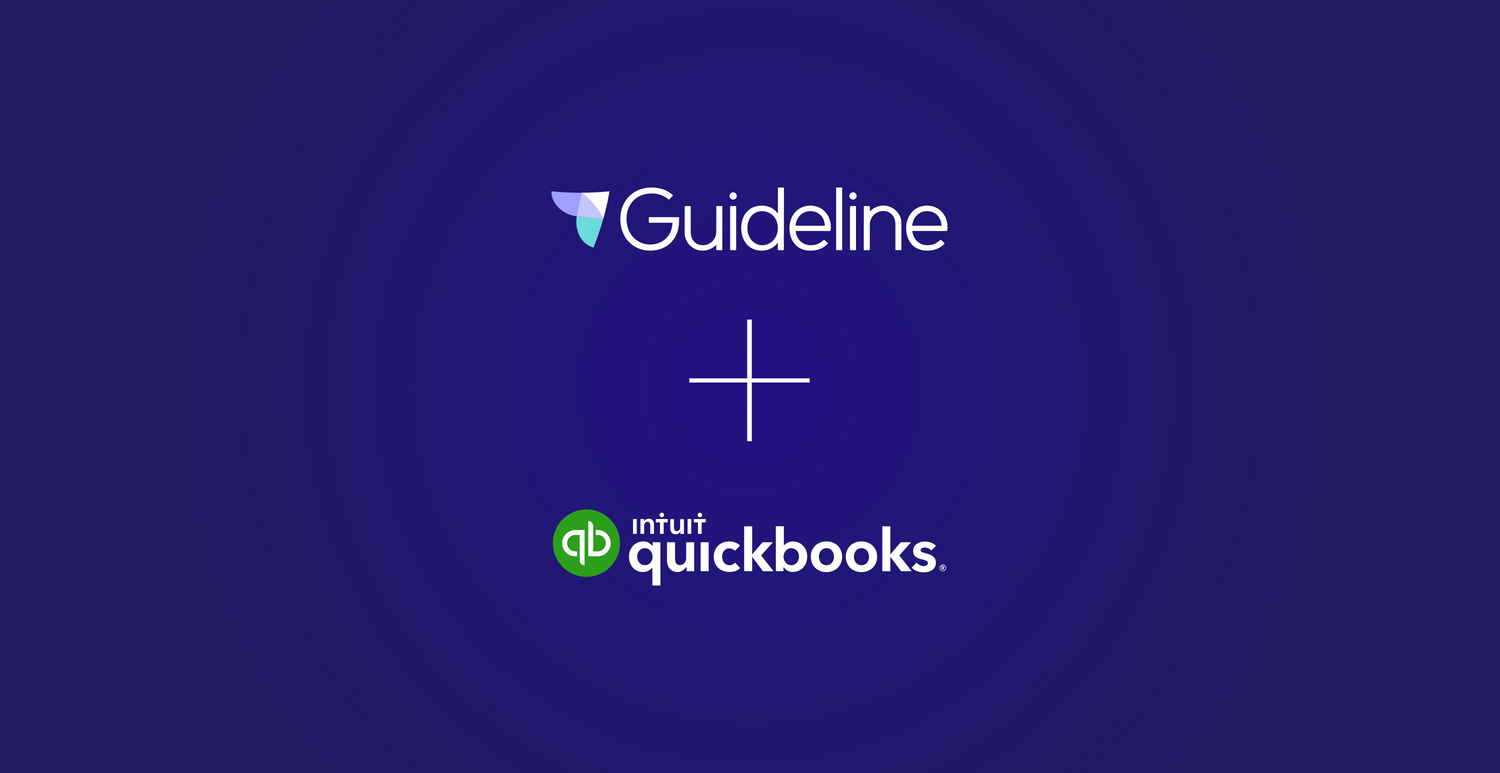 Teaming up with Intuit QuickBooks on small business retirement 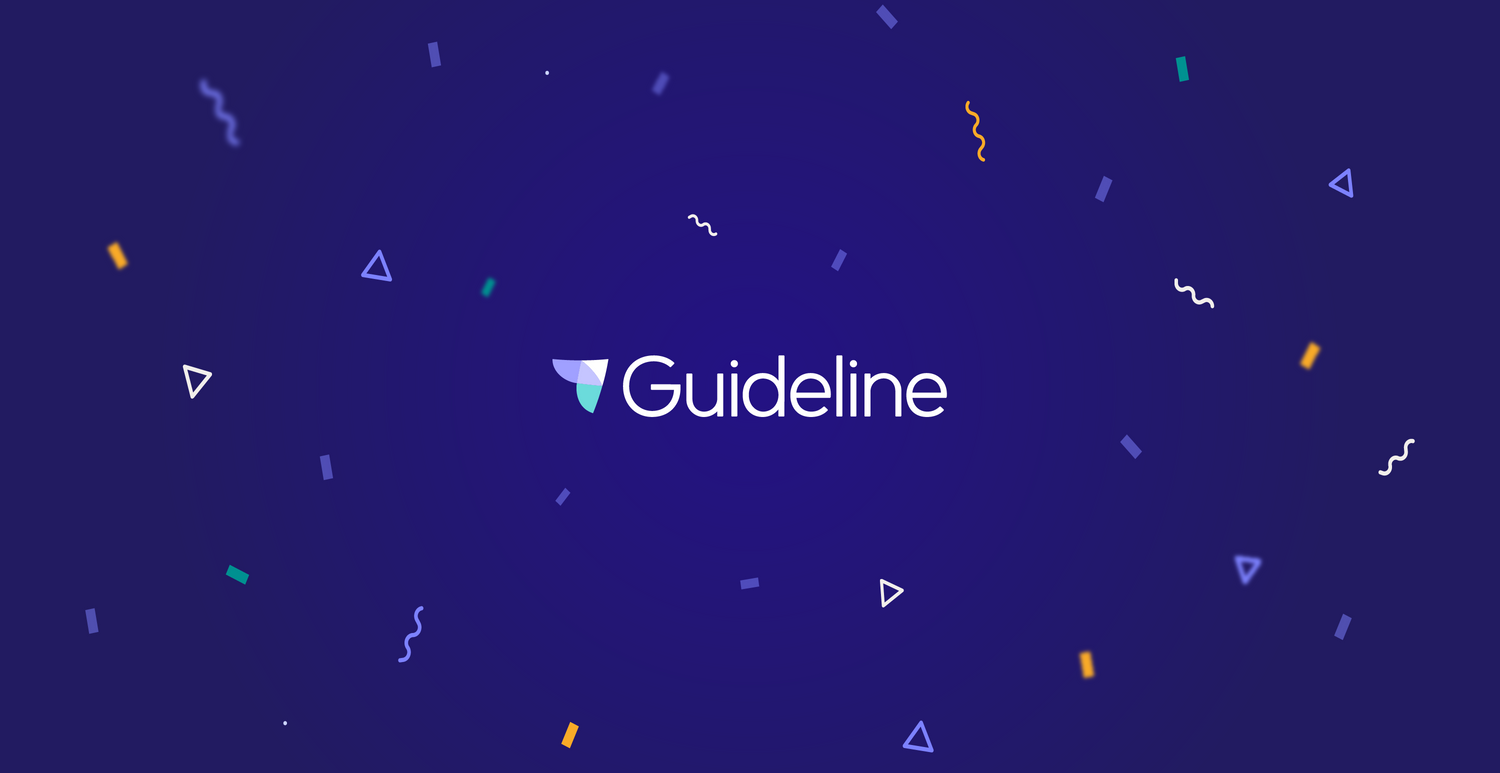