Anyone with access to the Internet knows that over the last couple of years, interest in millennial behavior patterns has skyrocketed. Between being scolded for loving avocado toast and being blamed for the demise of everything from golf and homeownership to dinner dates and diamonds, millennials can’t seem to catch a break. People and organizations alike watch - and judge - how millennials spend their money very closely. A 2017 report from Charles Schwab went so far as claiming that millennials spend far more than other generations on “comforts and conveniences,” which apparently equates to going out to dinner, spending $4+ on coffee, and commuting via Uber and Lyft. Shocking!

Because of the ever-rising interest in millennial behavior, we decided that in honor of National 401(k) Day this year, we’d release a report that shows how millennials are preparing for retirement. The data, which we sourced by analyzing the retirement planning behavior of a sample of more than 5,400 millennials on the Guideline platform, might come as a surprise. So sit back, grab a slice of avocado toast, and let’s get to it.

The first and most obvious question we wanted to answer with this study was, how much are Guideline millennials saving for retirement? And how does the saving behavior compare to industry benchmarks? We found that on average, Guideline millennials are saving a significant portion of their income for retirement - around 8.3% annually. To put that in perspective, according to Deloitte, the average 401(k) contribution rate is 6%.

Vanguard says it’s 7.1% overall and around 5.9% for people between the ages of 25 and 34. The standard 401(k) default contribution rate is 3%, so our data indicates that not only are Guideline millennials saving, but they’re opting to save more than what’s presented as default. The contribution rates reported here do not include employer contributions. Please note that if we had included employer contribution to the plans, the overall saving rates would have been higher.

It’s exciting that even though millennials are more likely to purchase clothing that they don’t “need,” that doesn’t mean they aren’t thinking about retirement. Interestingly, we also found that 20% of Guideline millennials are business owners. We’re proud of the entrepreneurial spirit that makes up our community of plan sponsors and participants, and the small business growth they’re fostering in our country. 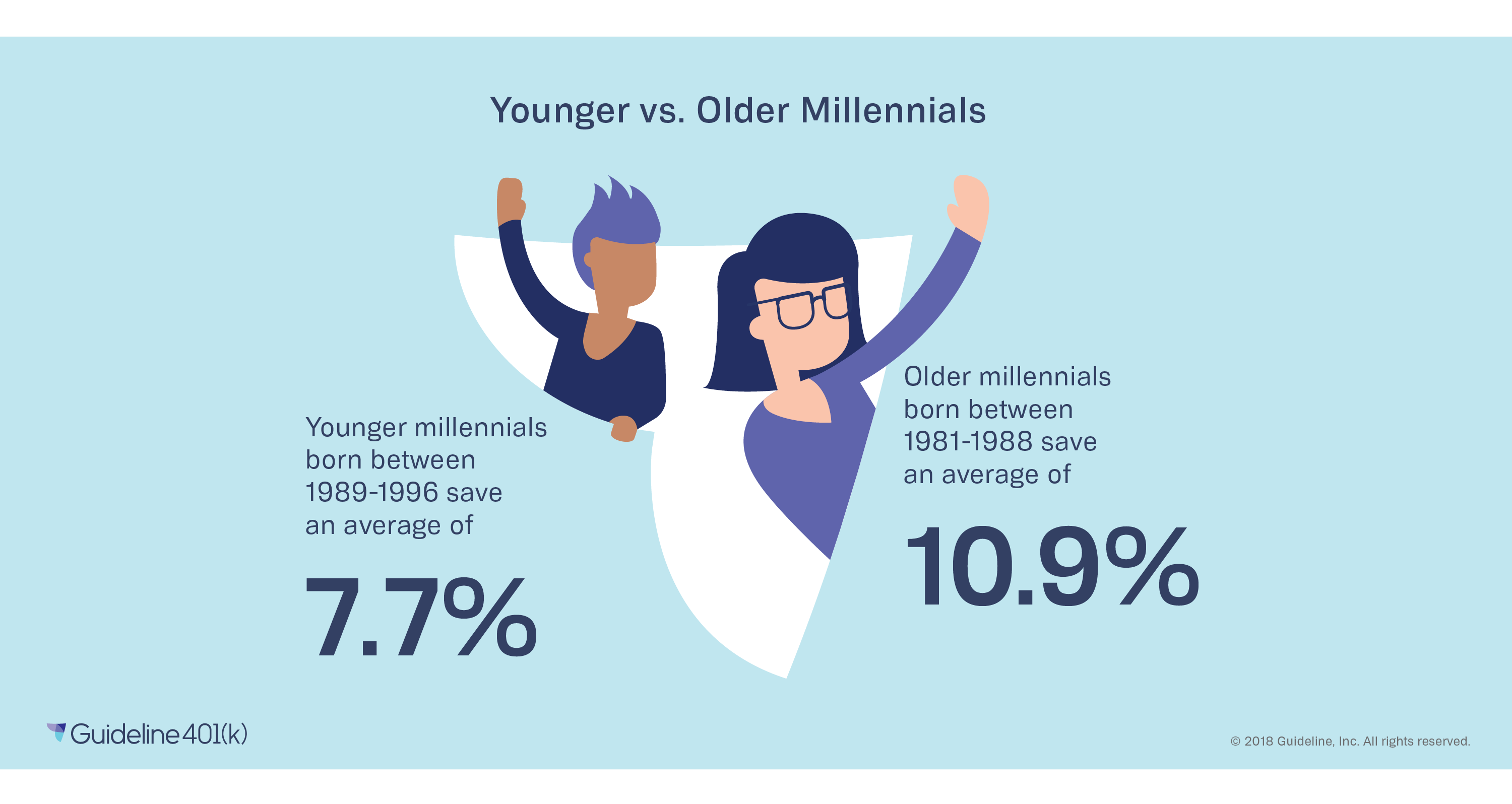 Not that it should be thought of as a competition, but we were also interested to see how millennial saving behavior compares to that of older generations within the Guideline community.

Once we learned that Guideline millennials are doing a pretty good job saving for retirement, we decided to see how saving rate changes by industry. So, we pulled the data sets again and separated by industry, which resulted in some pretty fascinating learnings. The top three Guideline millennial saving industries in order are: Technology and Startups (10%), Education (9.8%), and Medical Care Providers (9.7%). The lowest? Real Estate (6.3%) and Administrative Services (5.1%). 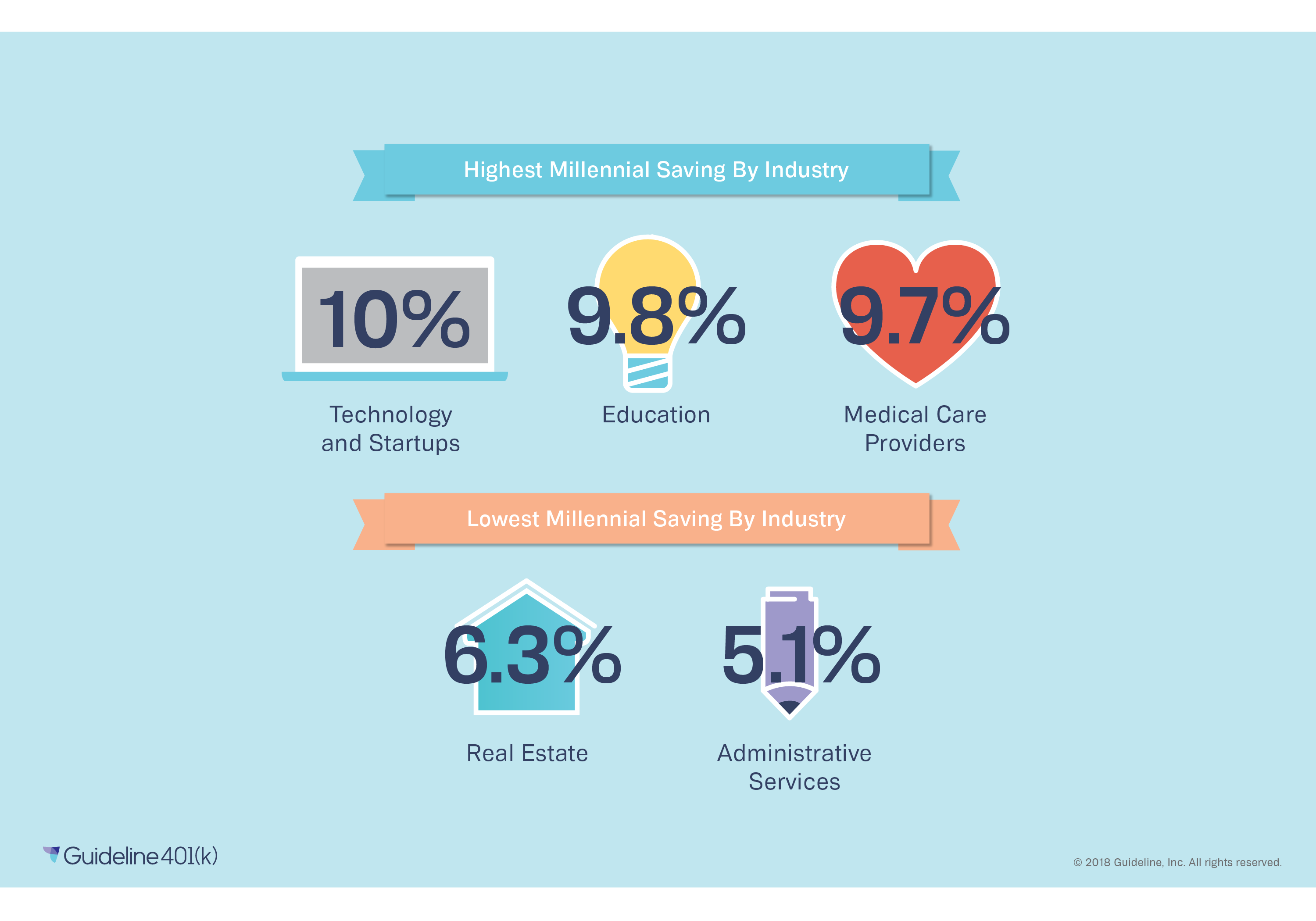 After learning how saving breaks down by industry, our next inkling was that pulling how saving changes by state of residence would also be interesting. How does a Guideline millennial’s geographic location impact saving? Coming in with an average saving rate of 9.7%, Massachusetts takes first place for Guideline millennial retirement planning, followed closely by Virginia at 9.6% and California at 9.2%. What states have the lowest millennial saving averages? Oregon at 6.2%, Florida at 5.9%, and Utah at 5.6%.

So, after diving into all of this millennial savings data, you might be curious: of all millennials who are offered a Guideline retirement plan, how many are actually taking advantage? In all, 84% of them are participating. This is important because it indicates that millennials are craving a way to save for the future, and for those on the Guideline platform, we’re beyond proud to fill that role.

While we’re excited to see such positive momentum from Guideline millennials, it wouldn’t be right to close without saying that we still have work to do - it is National 401(k) Day, after all. According to some experts, people should aim to save at least 15% of their income annually for retirement, which means every age group could do with some improving here. 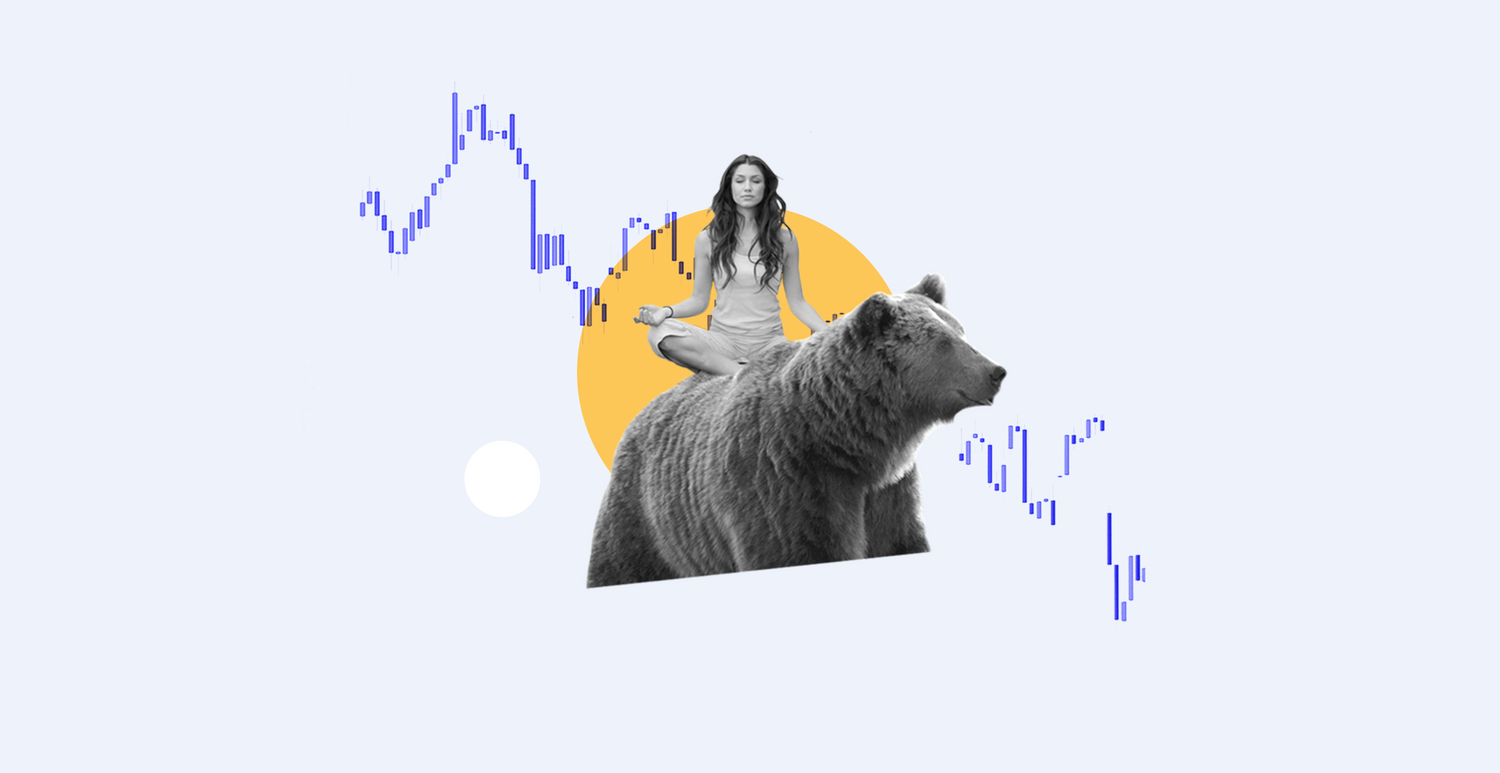